Carroll Mansion will be open for Doors Open Baltimore from 12pm – 4pm.

Built around 1811, the Carroll Mansion was situated in what was then a highly affluent part of town. Charles Carroll, who was in his later years the last surviving signer of the Declaration of Independence, lived there with his daughter and son-in-law for the last twelve years of his life, often receiving distinguished visitors. His family lived there until 1846. Then the mansion stayed empty for years. In 1855, Sisters of Mercy purchased the mansion. In the years that had elapsed, the surrounding area was abandoned by its wealthy residents and became a neighborhood of the working class. On this account, Sisters of Mercy rented out the mansion, and the first story was turned into a saloon, the second into apartments. In 1868, Sisters of Mercy sold the mansion, and for the next forty years, it remained a saloon and furniture store. In 1904, an article reported that it was being used as a sweatshop to make clothing, and the mansion was finally deeded to the City of Baltimore by 1914. It became the city’s first vocational school in 1918. The school offered courses in tailoring, printing, and mechanics. This lasted for a decade. In 1928, the mansion was restored again and opened for the display of antiques. When the mansion was converted into a recreation center in 1937, it underwent renovations to include showers, toilets, and a new heating system. But then in 1954, its doors closed once again. The mansion was slated to be torn down to build a gas station in the 60s, but many residents of Baltimore protested these plans, and with his election in 1962, Mayor Theodore McKeldin pledged that the mansion would be turned into a museum to house an extensive collection of antiques to mirror the 1820s and 30s, when the Carroll family had lived there. Today, it’s one of Baltimore’s best surviving examples of Federal architecture. 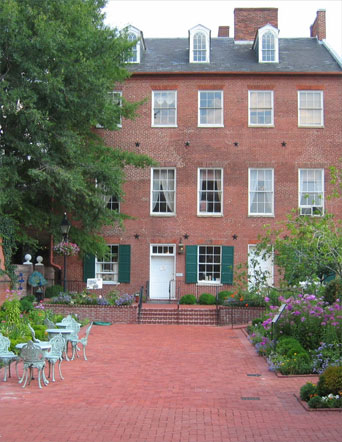